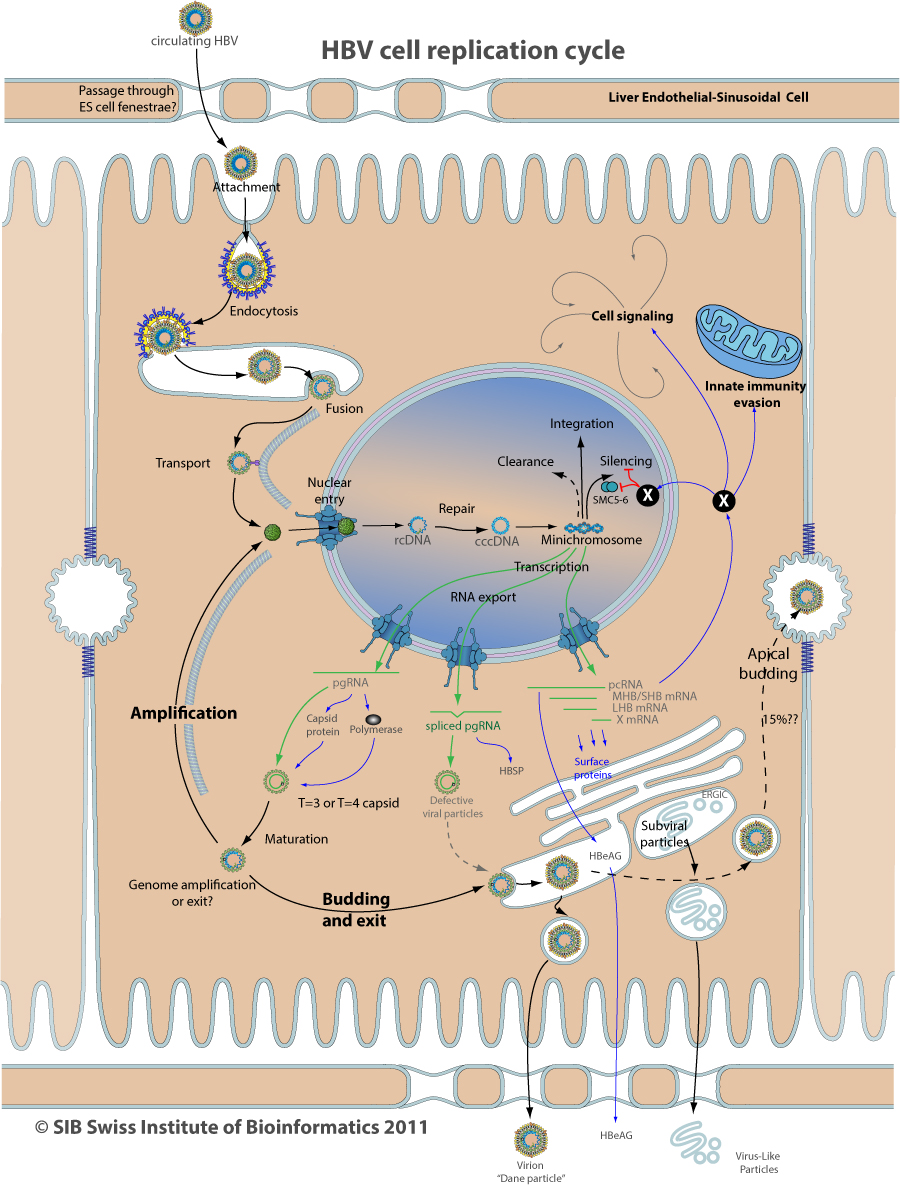 HBV enters the cell through caveolae-mediated endocytosis. The virion is presumably internalized in the caveolae upon binding to host receptors, and subsequently delivered to the early endosome. The latter matures into late endosome, accompanied by a pH acidification down to pH 6.0.
The virion enters the nuclear pore, where it is stopped and disassembled 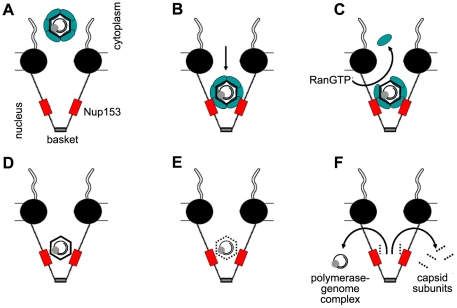 HBV virion attaches to target hepatocyte by interacting with several receptors
Virion membrane fuses with host endosome membrane, releasing the nucleocapsid into the cytosol
The viral nucleocapsid is transported along microtubules to reach cell's nucleus. This may involve capsid-dynein interaction
The cccDNA is generated from the viral polymerase (P protein)-linked relaxed circular (RC) DNA present in incoming virions which is repaired by host DNA repair proteins
The cccDNA is bound to cellular histones and viral capsid protein, forming a minichromosome
The minichromosome may be cleared out of the nucleus by unknown mechanism. Maybe mitosis plays a role.
Rarely, HBV genome can be integrated into host genome. This would involve RcDNA repair mechanisms
Minichromosome can be silenced by CpG island methylation
The X mRNA is transcribed early and transiently, whereas structural protein and genomic mRNA are expressed later and constantly
Conserved splice sites in the genomic RNA may prevent it's export from the nucleus. A genomic PRE signal seems to circumvent cellular quality control export machinary
Several splicing events occur in HBV genomic RNA. The major one produces the HBSP protein whose function is unknown
Capsids stay in the cytoplasm until their maturation which is linked to reverse transcription of pgRNA into rcDNA, and associated modifications at the capsid surface

The same mature particle seems to either go back to the nucleus for amplification, or go to budding/exit. Possibly the amount of L surface protein available for budding in the RE decides the fate of the particle
Mature nucleocapsids expose the capsid NLS to their surface, and therefore are competent to be targeted back to the nucleus. This results in amplification of nuclear cccDNA and a stronger transcription of viral genes.
Mature particles can interact with surface proteins in the ER and induce budding ans transport of enveloped virion out of the cell 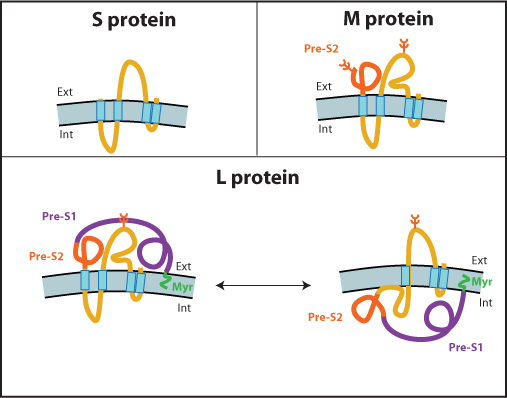 15% of virion may bud at the bile canal
The X protein is associated with many functions and interactions. X exist only in mammals HBV, therefore may have evolved to counteract specific defenses
The X protein in the nucleus may have many functions, the principal would be to promote efficient minichromosome transcription by degrading host SMC5-6 complex
The X protein counteracts MAVS activity on the mitochondria, an important antiviral signaling molecule
The X protein modulates many signaling pathways, including NFkappaB, cell cycle regulation, and modulation of apoptosis
Liver Endothelial Sinusoidal Cells are physically separating the circulating blood and the hepatocytes. They play a major role in many virus clearance form the blood
Hepatitis B virus likely passes the LSEC barrier through cells fenestrae. An active process could be involved.