In humans, the APOBEC3 family comprises 7 members: A3A, B, C, DE, F, G, and H that play important roles in antiviral response. For example, APOBEC3A is the predominant form in IFN-?alpha treated monocytes suggesting that this isoform plays an important role in initiation of host defense against viruses. Biochemically, these enzymes catalyzes cytidine deamination in single-stranded DNA (ssDNA) mediated by a histidine and two cysteines, which form a catalytic center. This activity is particularly efficient against retroviruses during the reverse transcritpion phase. Apobec3-mediated hypermutation through deamination of viral genomes is very detrimental to further spreading the infection. 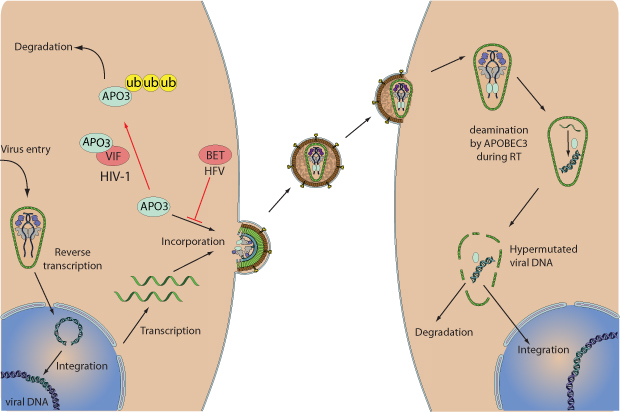 Viruses escape from the antiviral activity of APOBEC3 by using different mechanisms. The HIV Vif protein forms a complex with host APOBEC3F and APOBEC3G and prevents the entry of these lethally hypermutating enzymes into progeny virions. Vif recruits an active E3 ubiquitin ligase complex composed of elongin BC, CUL5, and RBX2 to induce polyubiquitination of APOBEC3G and thus degradation. The Bet protein from human foamy virus instead interacts with host APOBEC3C and thereby prevents its dimerization. This step is important since it was shown that formation of tetramers and higher-order homo-oligomers of APOBEC3 on ssDNA is required for efficient deamination.