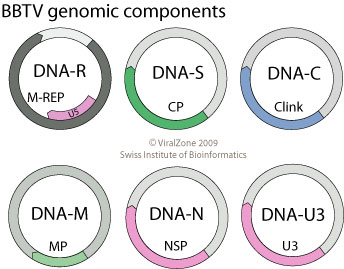 Multipartite ssDNA genome (+) composed of 6 to 8 circular segments about 1kb in size. Each ssDNA segment have a common stem-loop region and are encapsidated in a separate particle.
In addition to genomic DNA, up to 4 satellite-like DNAs are found in some isolates, usually encoding for accessory Rep proteins (para-Rep). These satellite-rep proteins are only able to initiate replication of their genomic DNA, unlike genomic encoded Master-Rep (M-Rep) which promotes replication of all 6 viral genomic ssDNAs (trans-replication).

Each ssDNA genome segment is monocistronic, except for BBTV DNA-R which contains a second small ORF U5 internal to the Rep-encoding ORF. U3 and U5 are absent in ABTV.

Protein Clink can bind retinoblastoma (pRB) and is possibly responsible for inducing transition from the G1 to S phase in preparation for virus replication since the virus targets differentiated non-dividing cells.