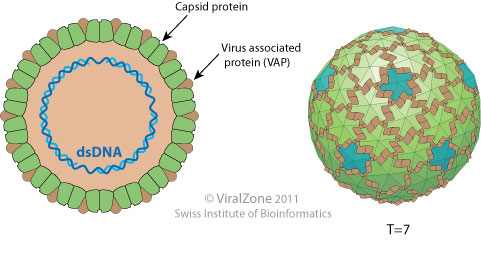 Non enveloped, large (50 nm diameter) icosahedral particles composed of 420 subunits with a T=7 symmetry. The virion shell is multi-layered. It has not been described whether handedness of capsid is laevo or dextro, here the pictures dsplays a laevo form.

Circular double stranded DNA of about 8000 base pairs with discontinuities in both strands: one in the transcribed strand and one to three in the non-transcribed strand. Codes for 8 proteins.