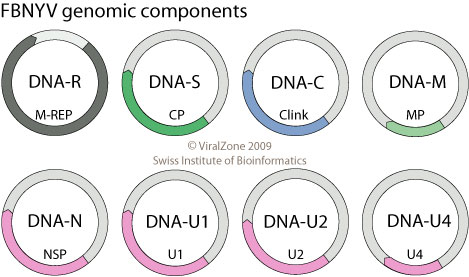 Multipartite ssDNA genome (+) composed of 6 to 8 circular segments about 1kb in size. Each ssDNA segment have a common stem-loop region and are encapsidated in a separate particle .
In addition to genomic DNA, satellite-like DNA are commonly found, usually encoding for Rep proteins. These satellite-Rep proteins are only able to initiate replication of their genomic DNA, unlike genomic Rep which promotes replication of all 6-8 viral genomic ssDNAs.

Each ssDNA genome segment is monocistronic. In rare cases a gene encodes for two overlapping ORFs.