Since the minichromosome has a nucleosomal organization, post-transcriptional modifications of histones (acetylation, methylation or ubiquitination) regulates silent vs active DNA, and subsequently viral replication. For example, Pollicino and colleagues showed that histone hypo-acetylation and histone deacetylase 1 recruitment onto the cccDNA in liver tissue correlated with low HBV viremia in hepatitis B patients (Pollicino et al. 2006) Rating=2. In addition, levels of HBV replication paralleled acetylation, phosphorylation and methylation of cccDNA-bound histones H3, further arguing for the importance of histones modifications in cccDNA (Gong et al. 2011) Rating=2. 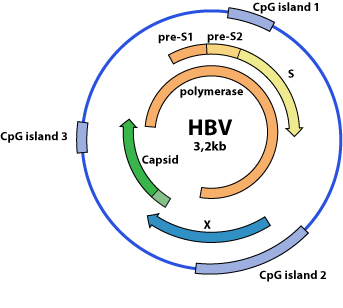 Comments
The cellular machinery is able to down-regulate HBV minichromosome transcription, but it is still unclear if this happens in vivo. HBx might play a role in preventing this to happen.