– C positively regulates the late genes transcription by binding to the Plys, PI, Pp and Pmom (MomP1) promoters. MomP1 is subject to additional positive control by Dam methylation and negative control by the host OxyR function

– In the absence of C protein, leftward transcription from momP2 occurs 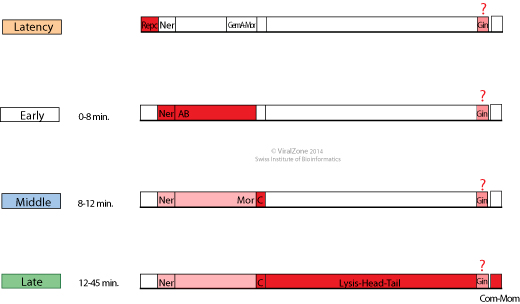 – The early operon starts with Ner and presumably ends at the terminator t9.2 in the Pm region

.
– The middle operon encode the middle genes and termination occurs immediately downstream of the C gene

.
- The lys operon starts with Lys and ends at a terminator in the intergenic region between G and I

.
– The I operon starts with protease I and probably encodes a very long transcript which continues through the N gene

.
– The P operon terminates in the intergenic regions and between U and U'

.
– The Mom operon encodes Com and Mom and probably ends at a terminator located between the mom stop codon and the end of the Mu genome


NB. A promoter Pgem that would control the expression of GemA and Mor has been suggested, but it is not clear if it exists. If yes, this region could be expressed at a different timing than the other early products