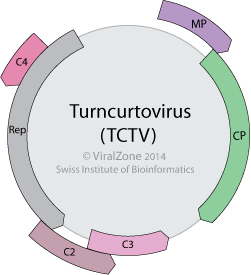 Transcription is bidirectional from the intergenic region. 6 proteins are produced. On the v-sense: Movement protein (MP) and CP protein. On the C-sense: Rep, C2, C3 and C4.
Proteins are expressed from subgenomic RNAs (sgRNAs).