. These nucleosides are defective in the sense that they prevent new 3' phosphodiesterase bonds with the next nucleotide in a growing DNA strand

. These nucleoside analogues are phosphorylated by human cellular kinases to their triphosphate form where they are subsequently incorporated by RT into the growing DNA primer strand of HIV. This results in premature chain termination and the inhibition of successful HIV replication 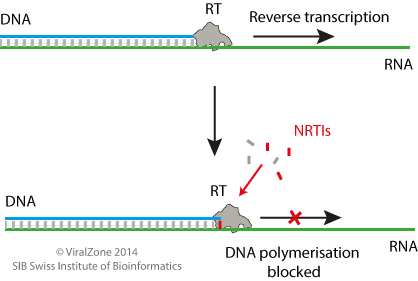 These drugs have been found highly effective for the treatment of HIV-1 and are generally regarded as safe to use but life-threatening adverse reactions, like mitochondrial toxicity, have been reported

. Mitochondrial toxicity occurs due to the ability of NRTIs, except abacavir and lamivudine, to compete with human mitochondrial DNA polymerase gamma

NRTIs have no CYP 450 interactions

. They are subject to interactions of glucuronidation and absorption and metabolism differs with each drug.