Viral entry is a complex, multi-step process that involves coordinated, sequential interactions between gp120 and gp41 and host surface proteins. A post attachment step consists in the fusion of viral and host membranes. This step offers several potential targets for antiviral interaction. There is so far only one fusion inhibitor for HIV treatment which is enfuvirtide. This 36 amino acid polypeptide engages in coil-coil interaction with the heptad repeat (HR) regions of the viral glycoprotein gp41. As a consequence of this interaction, a blockade of the virus particle with the outer cell membrane occurs. This drug is generally used in treatment experienced patients that usually failed previous antiretroviral combinations. Enfuvirtide treatment remains complicated since it is the only anti-HIV compound that is not orally available. Indeed, it must be injected subcutaneously twice daily. 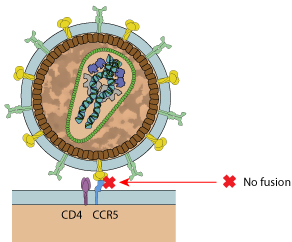 Injection site reactions may occur such as erythema, cysts, and nodules.