. This change decreases the RT and nucleoside binding affinity and prevents viral replication 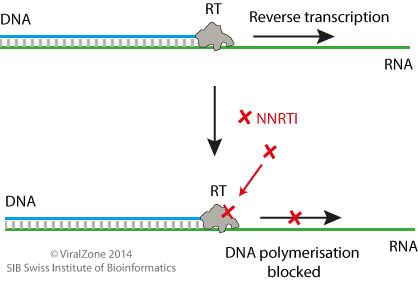 Toxicities and viral drug resistant mutations do not overlap between NRTIs and NNRTIs, and so are effective together in HAART regimens

. The most common side effects of NNRTIs are fat redistribution

, and a mild rash

Although each NNRTI drug is different in its pharmacokinetics and chemical structure, they share a similar mechanism and are all metabolized by cytochrome P450 enzymes to some extent

. Furthermore, they can inhibit or induce cytochrome P450 enzymes which will affect the metabolism of other drugs.