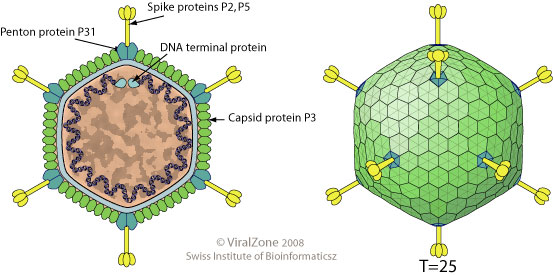 Non enveloped, icosahedral virion with a pseudo T=25 symmetry, consisting of 240 capsid proteins trimers. Virion size is about 66 nm with apical spikes of 20 nm. The capsid encloses a inner membrane vesicle within which the genomic DNA is coiled.

Linear, dsDNA genome of about 15 kb flanked by inverted repeats. Encodes for about 32 proteins. Replication is protein-primed.