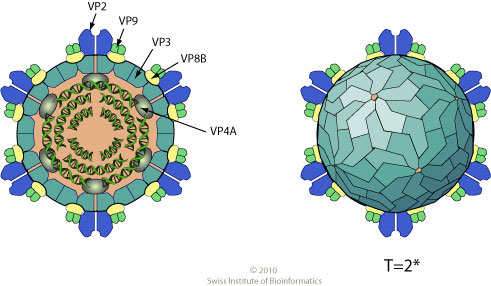 Non enveloped, icosahedral virion with a double capsid structure, about 70 nm in diameter. Pentameric turrets (VP2) sit on the outside of the innermost capsid (VP3). Each turret is surrounded by five peripheral trimers (VP9) and each trimer binds to three clamp proteins (VP4B). The outer incomplete capsid has a T=13 icosahedral symmetry, the inner capsid a T=2* icosahedral symmetry