Non-enveloped, T=1 icosahedral symmetry, with a diameter of about 30-32nm.. 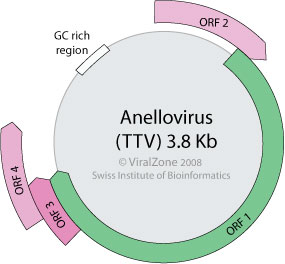 Circular ssDNA genome (-) of about 3.8 kb.
The genome is replicated through double-stranded intermediates. It may encode for 4 proteins: ORF1 (Rep protein?), ORF2, ORF3 and ORF4.

The proteins are expressed by alternative splicing of pre-mRNA.