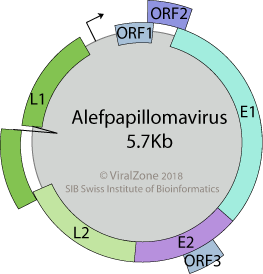 Circular dsDNA, about 5.7 kb in size, associated with cellular histones.

Only one strand of the genome is transcribed and yield two classes of proteins expressed by alternative splicing :
a) Early Proteins: non-structural regulatory proteins (E1-E2), and possibls 0RF1-3.
b) Late Proteins: the structural proteins L1 and L2.