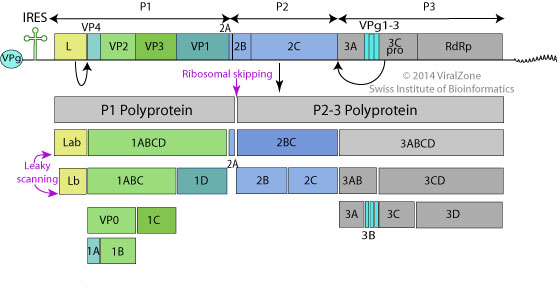 Linear ssRNA(+) genome of 7.5-8.5 kb, polyadenylated, composed of a single ORF encoding a polyprotein. Viral genomic RNA has a viral protein (VPg) at its 5'. The long UTR at the 5' end contains an internal ribosome entry site (IRES) type II. The P1 region encodes the structural polypeptides. The P2 and P3 regions encode the nonstructural proteins associated with replication. Encodes a N-terminal leader protease (L protease) in addition to the 3C protease. The shorter 3' UTR is important in (-)strand synthesis.