Cardiovirus is a genus of ssRNA+ viruses in the Picornaviridae family that infect vertebrates. In humans, these viruses can cause myocarditis. 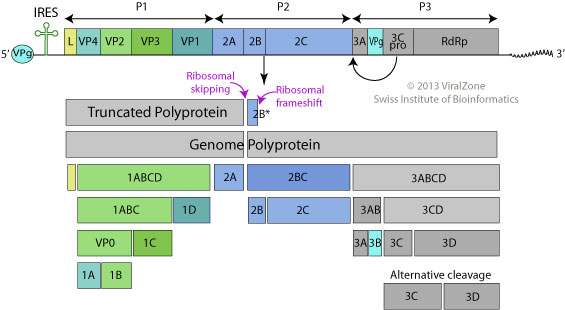 Monopartite, linear ssRNA(+) genome of 7.8 kb, polyadenylated, composed of a single ORF encoding a polyprotein. Viral genomic RNA has a viral protein (VPg) at its 5' end instead of a methylated nucleotide cap structure. The long UTR at the 5' end contains a type II internal ribosome entry site (IRES). The P1 region encodes the structural polypeptides. The P2 and P3 regions encode the nonstructural proteins associated with replication. Encodes a unique protease 3C. The leader (L) protein is thought to exert important functions in virus-host interactions. The shorter 3' UTR is important in (-)strand synthesis.

The virion RNA is infectious and serves as both the genome and viral messenger RNA. The IRES allows direct translation of the polyprotein. The polyprotein is initially processed by the viral protease into various precursor and mature proteins to yield the structural proteins, replicase, VPg, and a number of proteins that modify the host cell, ultimately leading to cell lysis. Ribosomal skipping is used at the junction of the 2A and downstream sequence. A truncated version of the polyprotein is produced by ribosomal frameshifting in the 2B region of EMCV and ThV, producing only structural proteins and 2B*

.
ThV is the only cardiovirus to produce two additional proteins from an ORF overlapping the L protein, in another frame. These two proteins, L*-18kDa and L*-15 kDa, are probably expressed through leaky scanning

, whereas antiapoptotic activity has been attributed to cardiovirus leader protein

. They seem to inhibit nuclear trafficking in general.