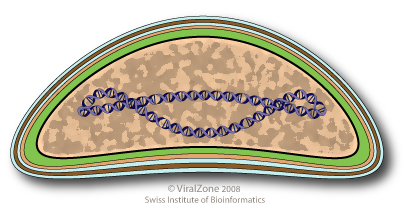 Virions consist of an envelope, a core, and an internal lipid membrane associated with the inner particle. Virion can be bacilliform, ovoidal or allantoid in shape, mesuring about 130 nm in diameter, by 200-400 nm in length. Contains at least 15 different proteins.

Encode for up to 180 open reading frames.

The Spodoptera frugiperda ascovirus encodes a viral caspase that is able to induce apoptosis in insect cells.