Budding enables viruses to exit the host cell and is mostly used by enveloped viruses which must acquire a host-derived membrane enriched in viral proteins to form their external envelope. Viruses can bud at every stage in the ER-Golgi-cell membrane pathway.
Nucleocapsids assembled or in the process of being built induce formation of a membrane curvature in the host cell membrane and wrap up in the forming bud which is eventually pinched off by membrane scission to release the enveloped particle 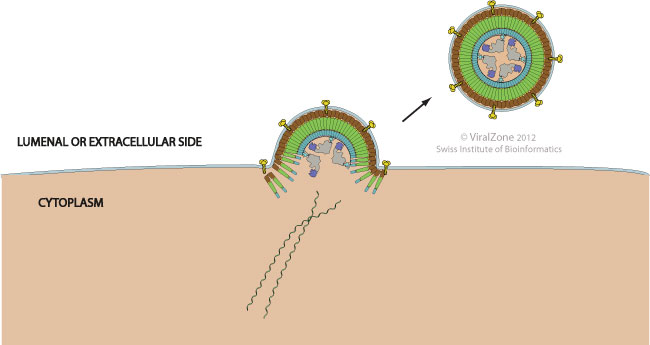 Many viruses, such as arena-, filo-, flavi-, hepadna-, herpes-, rhabdo-, and some paramyxoviruses, recruit host ESCRT proteins for budding.
However, for orthomyxo-, toga-, and corona- the budding is ESCRT-independent

.
The only prokaryotic viruses known to bud are the Plasmaviridae

Cell defense:
Tetherin(D28137:9606) expression that follows the establishment of the cell antiviral state impairs the release of many enveloped viruses