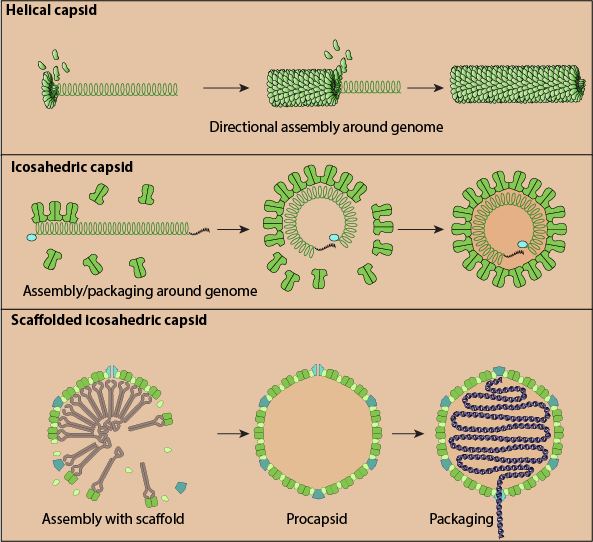 Helical capsids are assembled around genomic RNA or DNA, and rely on self and nucleic acid interactions to assemble. Assembly and packaging are linked. -<u>Negatives stranded RNA viruses genome is concomitantly encapsidated during replication. The packaging of these viruses occurs prior budding at the plasma membrane

. Icosahedric capsids usually assemble by affinity around the viral genome. Complex capsids need the help of scaffolding proteins to assemble into empty procapsids

. The scaffolding proteins are removed from the empty capsid by maturation events before packaging

. -<u>Nucleo-Cytoplasmic Large DNA viruses (NCLDV) contain an internal membrane, consequently they have a complex and regulated assembly mechanism. Poxviridae capsid-like protein is removed before virion maturation and serves as a scaffolding protein

. -<u>"Reoviridae":/by_species/104 and Totiviridae have their capsid assembled around messenger RNAs that are later replicated into genomic dsRNA, thereby hiding the dsRNA from cellular antiviral sensors.