Satellite virus: infectious only if host cell is co-infected with Adenovirus or Herpesvirus 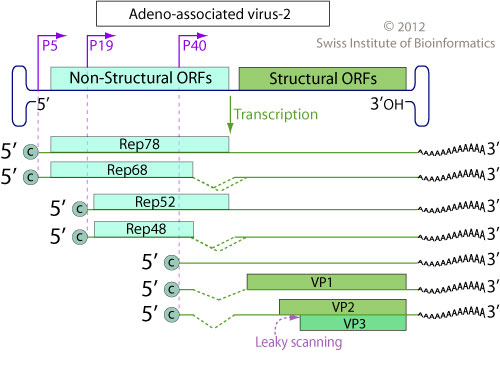 Linear, ssDNA genome of about 4.7kb in size. Equal amount of positive and negative strands are encapsidated, although the percentage of particles encapsidating the positive strand can be lower depending on the host cell. ORFs for both the structural and non-structural proteins are located on the same DNA strand.
The genome is replicated through rolling-hairpin mechanism. All dependoviruses except duck parvovirus and goose parvovirus depend on helper adenovirus or herpesvirus to replicate efficiently.

Host proteins transcribe the genomes into mRNAs. Transcription is regulated by the three promoters P5, P19 and P40: P5 transcripts are expressed first, followed by those from P19, then those from P40. Alternative splicing allows expression of three different mRNAs for each promoter. mRNA9 is translated into VP2, or VP3 by leaky scanning.

.
When coinfecting with adenovirus, AAV induces apoptosis by activating the DNA damage response. This is probably linked to the presence of a specific sequence in the viral genome.