E1A is transcribed from the E1A immediate early promoter as soon as the viral genome enters the cell nucleus.

The host cell cycle is pushed into the S phase.

Initial expression of E1A provides transcriptional activators that, with host proteins, turn on the expression of the early promoters E1B, E2E (E2 early), E3, and E4.

The early proteins optimize the cellular milieu for viral replication, and counteract a variety of antiviral defenses. The major late promoter (MLP) is weakly active during this phase with a transcription up to L1 (primarily producing the i-leader protein and L1-52/55K proteins).

Efficient transcription from the E2E promoter results in accumulation of the E2A DNA binding protein (DBP), E2B precursor terminal protein, and DNA polymerase, which set the stage for viral DNA replication to begin.

Activation of the transcription from pIX, IVa2, and E2 late promoters.

Transcription of the E4 region declines probably due to the repression by the DNA-binding protein.

. L4-22K and L4-33K regulate the splicing pattern of late transcripts

The MLP is fully activated and produces transcripts from L1 to L5 to allows synthesis of structural proteins.

Except for the polypeptide IX mRNA, all primary transcripts undergo one or more splicing events which give rise to about fifty distinct mRNAs during the lytic infection

Variation of the E3 region among human AdV species 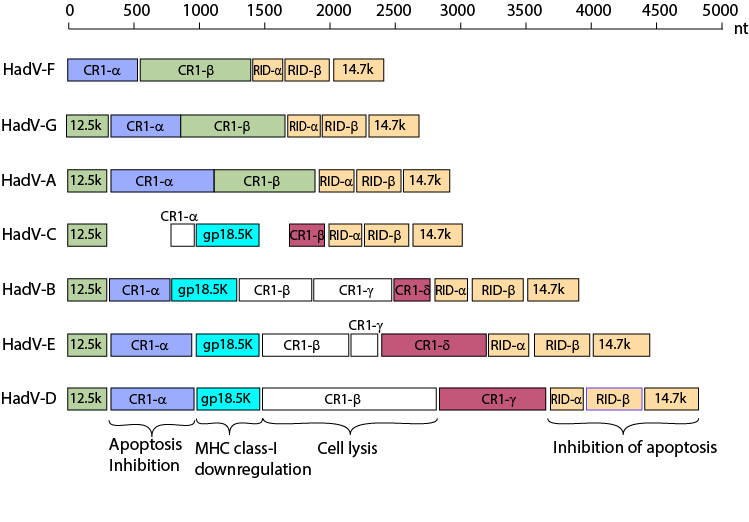