Most plant viruses depend in insect vectors for their survival, transmission and spread. Specific virus-insect vectors interactions have evolved, in a mutualistic symbiosis at the detriment of the plant. The principal families of insect vectors which cause the most damage to agricultural crops through the spread of plant virus are in the order Hemiptera, and include the aphids, leafhoppers, delphacid planthoppers and whiteflies.

The transmission can be: Non-circulative (NC): The virus binds the stylet during feeding and is released when the insect secrets saliva on a new feeding place. Circulative, non-propagative:The virus circulates up through the food canal and cross the midgut and hindgut reaching the hemocoel. Then virus particles cross accessory salivary glands and return to the plant via the saliva canal. Circulative, propagative:The virus circulates in the host as described above, but actually infects insect cells and replicates in the vector. 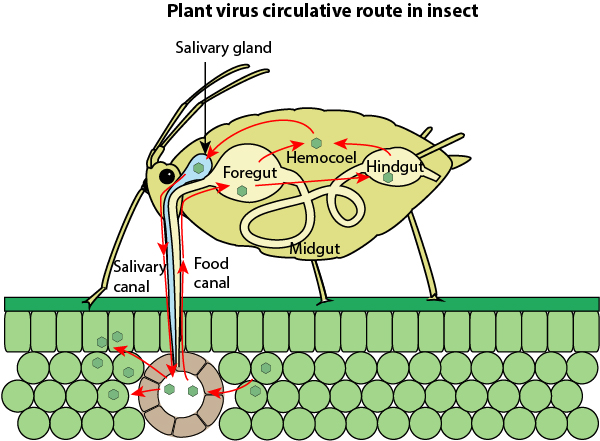