Modulation of host virulence by virus

Some bacterial viruses encode factors that modulate the virulence of bacterial host against a third organism. This change in properties of the host can occur at different levels including bacterial adhesion, spread through human tissues, exotoxin production or protection against immune defenses. These virulence factors are mostly expressed from integrated viral genomes and provide strong advantages to the bacterial host that carry them. 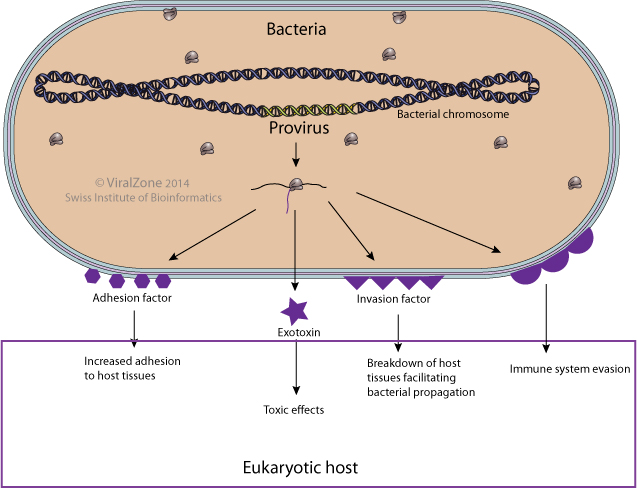 - Phage encoded diphteria toxin causes the disease diphtheria in humans by gaining entry into the cytoplasm of cells and inhibiting protein synthesis.

Invasion
Some phages encode invasins that allow the bacteria to penetrate the eukaryotic host tissue layers or cells.
Some of these proteins catalyze the breakdown of tissues in the eukaryotic host. From a confined site of infection, the bacteria can thus spread to other parts of the organism.
- Hyaluronidase for example breaks down hyaluronan, a constituent of the extracellular matrix to increase tissue permeability and allow bacterial spread.
- The complex formed by staphylokinase and plasminogen (PLG) displays a plasmin-like proteolytic activity which lyses fibrin and causes dissolution if fibrin clots. This activity may improve bacterial invasion of host tissues.

- Other protein like SopE are invasion factors that are injected in the eukaryotic cell to subvert host key signaling pathways for the benefit of the invading bacteria.
The salmonella phage encoded sopE protein promotes uptake of its host in intestinal epithelial cells

Source:Common themes among bacteriophage-encoded virulence factors and diversity among the bacteriophages involved