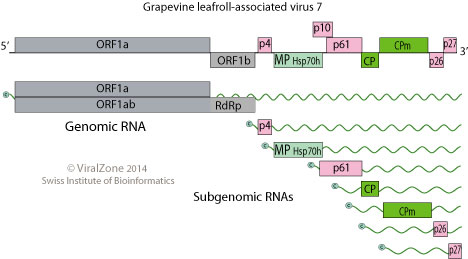 Linear ssRNA(+) genome of about 16-17 kb. The 3' terminus has no poly(A) tract and the 5' terminus probably has a methylated nucleotide cap. Encodes 10 proteins.

The virion RNA is infectious and serves as both the genome and viral messenger RNA. ORF1a and ORF1ab protein (containing RdRp) are produced by ribosomal frameshifting. Other ORFs are translated from a set of nested 3' co-terminal subgenomic RNAs.