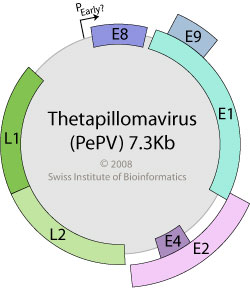 Circular dsDNA, between 7 and 8 kb in size, associated with cellular histones. An ancestral E7 ORF exists which have partial E6 characteristics. Typical E5 and E6 ORFs are absent. On rare non-specific recombination, the viral genome can be integrated in host chromosome. This inactivates the integrated virus but can gives the host cell a replicative advantage sometimes leading to malignant tumours.

Replication is divided in two distinct steps that are linked to the differentiation state of the host epithelial cell: