A syndemic is the aggregation of two or more diseases in a population in which there is some level of positive biological interaction that exacerbates the negative health effects of any or all of the diseases.(Wikipedia )

About one third of deaths among HIV-seropositive patients worldwide are due to co-infection with Mycobacterium tuberculosis (MTB). By infecting the same host, both pathogens replicate much better than alone. This syndemic is induced by a convergent dis-regulation of host immune response by HIV and MTB

. HIV infects primarily T-helper lymphocytes while MTB preferentially infects alveolar macrophages; it is likely that the syndemy occurs in trans via circulating factors. 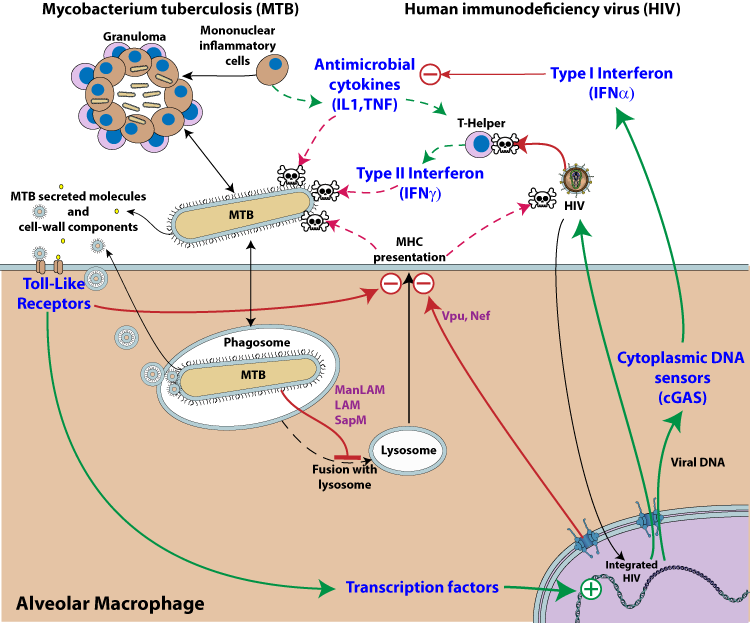 Legend:MTB and HIV Syndemy. Pathway activation is represented by green arrows, whereas inhibition is depicted by red arrows. The dotted lines represent normal host immune inhibition of microbial growth that is down-regulated upon co-infection with MTB and HIV. The two pathogens are represented in the same host cell, but it is likely that the mutualistic effect occurs in trans.

. Those factors bind to the promoter-proximal (enhancer) region of the HIV-1 long terminal repeat (LTR) and induce HIV-1 gene expression

. This results in activation of latent provirus in cells that are reached by MTB secreted molecules.

. These essential cytokines are inactivated upon local HIV replication

. Virus replication triggers a cGAS dependent type I interferon response, which is ineffective against the virus

. By up-regulating type I IFN, HIV lowers the host defenses against MTB activity. Type I interferon and interleukin-1/TNF-alpha cytokine pathways represent distinct and specialized categories of inflammatory responses and these key mediators of inflammation counter-regulate each other

, a key element in MTB control by the immune system.

Granulomas are a means of containing an MTB infection created by the immune system. This inflammatory process is characterized by the presence of macrophages, epithelial cells and multinucleated giant cells that are surrounded by a rim of T-lymphocytes. HIV co-infection modulates the granuloma aspect and cellular composition. De Noronha et al. show that HIV impairs the TNF-alpha production by granuloma cells

. Walter et al. found that the presence of HIV infection in patients with tuberculosis was associated primarily with decreased induction of the MTB DosR regulon, which modulates granuloma formation and MTB persistence

3. Inhibition of host antigen presentation by HIV and MTB

. It has been shown that several MTB lipoproteins, including LpqH, LprG and LprA, are key inhibitors of MHC class II antigen presentation, through activation of TLR2