Non-enveloped, rod of filaments of 7 nm in diameter and 1000 to 1200nm long in length. Helical capsid with adsorption proteins on one end.

Circular, ssDNA genome (+) of 6.3 to 7.5 kb encoding for 12 to 15 proteins. Replication occurs via dsDNA intermediate and rolling circle. 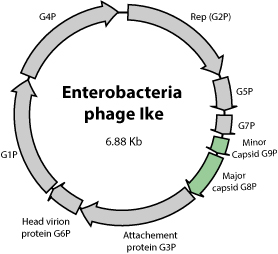