Non-enveloped, spherical, about 28 nm in diameter, T=pseudo3 icosahedral capsid surrounding the naked RNA genome. The capsid consists of a densely-packed icosahedral arrangement of 60 protomers, each consisting of 4 polypeptides, VP1, VP2, VP3 and VP4. VP4 is located on the internal side of the capsid. 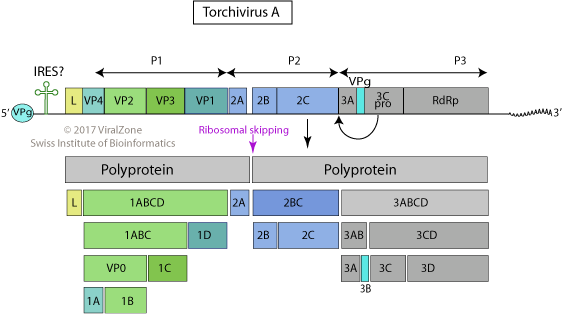 Monopartite, linear, ssRNA(+) genome of about 6.5- kb, polyadenylated, composed of a single ORF encoding a polyprotein. Viral genomic RNA has a viral protein (VPg) at its 5' end instead of a methylated nucleotide cap structure. The long UTR at the 5' end probably contains an internal ribosome entry site (IRES). The P1 region encodes the structural polypeptides. The P2 and P3 regions encode the nonstructural proteins associated with replication. Encodes a unique protease 3C. The function of the L protein is unclear. The shorter 3' UTR is important in (-)strand synthesis.

The virion RNA is infectious and serves as both the genome and viral messenger RNA. The IRES allows direct translation of the polyprotein. The polyprotein is initially processed by the viral protease into various precursor and mature proteins to yield the structural proteins, replicase, VPg, and a number of proteins that modify the host cell, ultimately leading to cell lysis.
Ribosomal skipping is used at the junction of the 2A and downstream sequence.