Inhibition of host TAP by virus

Transporter associated with antigen (TAP) composed of two subunits TAP1 and TAP2, is required for the translocation of peptides into the ER, where they are loaded onto MHC class I. Both subunits consist of an amino-terminal transmembrane domain and a carboxy-terminal nucleotide cytoplasmic domain. 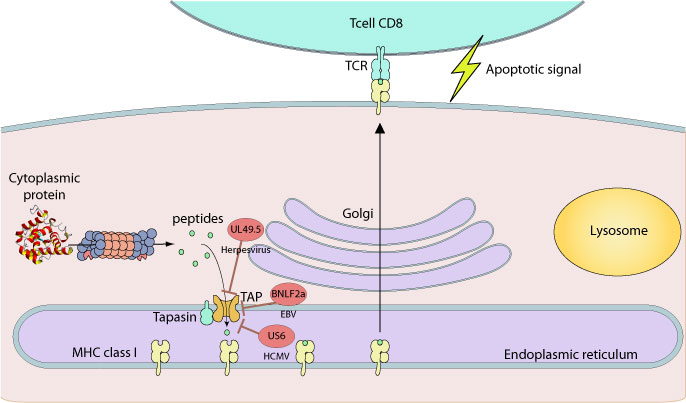 The loading of peptide on MHC by TAP is targeted by several viruses including herpesvirus. ICP47 from HHV-1 binds to the peptide binding site of TAP, with 10-1000 fold higher affinity than most peptides, thereby blocking the first step of the translocation pathway. HCMV US6 instead interacts with human TAP from the RE luminal side and inhibits ATP binding and peptide stimulated ATP hydrolysis. The UL49.5 proteins have different strategies to inhibit TAP. Bovine herpesvirus UL49.5 targets TAP for proteasomal degradation while equine herpesvirus blocks the binding of ATP to TAP. Finally, BNLF2a protein from Epstein-Barr virus prevents the binding of peptides and ATP to TAP.