The G2/M checkpoint of the cell cycle prevents the cell from entering mitosis to repair the the damaged genome and participates on various pro-survival signaling pathways. During the G2 phase the CDK1 kinase is maintained in an inactive (phosphorylated at Tyr-15) state by Wee1-like protein kinase. As cells approach M phase, the phosphatase Cdc25 dephosphorylates and thus activates CDK1, step that promotes cell entry into mitosis. The complex cyclinB-CDK1 migrates to the nucleus where it activates several substates to allow cells enter mitosis. 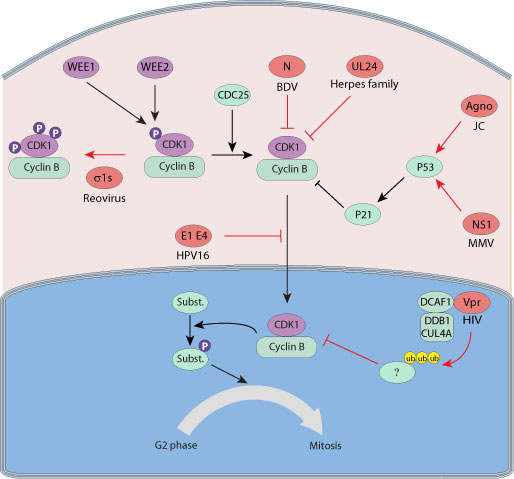 A number of different viruses have been associated with G2/M arrest, including DNA viruses, RNA viruses and retroviruses. The arrest in G2/M allows viruses to replicate their genome before cells enter mitosis. Alternatively, it can inhibit the antiviral immune response by preventing the clonal expansion of infected lymphocytes. Some viral proteins including JCV agnoprotein or MMV NS1 increase the cyclin inhibitor p21 activity through interaction with p53 to inhibit the cyclinB-CDK1. The nucleoprotein from Bornavirus or the UL24 protein from herpesviridae directly inhibit the cyclinB-CDK1 complex, while E4 from HPV16 prevents its nuclear localization. Instead, the serotype 3 reovirus sigma1-s protein hyperphosphorylates cyclinB-CDK1 that becomes inactive.