Cell cycle transitions are driven by activities of cyclin/cyclin-dependent kinase (Cdk) complexes. Cyclins are a diverse family of proteins containing a conserved region concentrated in a 100 amino acid stretch, known as the "cyclin box" which is necessary for Cdk binding and activation. They are grouped according to the cell cycle phase they regulate. Cyclin D family members are G1 phase cyclins. Cyclin E and Cyclin A are able to bind Cdk2 and promote the cell cycle progression through G1/S transition. Cyclins B are M-phase cyclins. 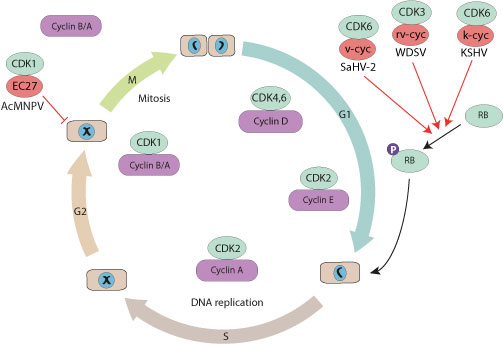 Originally found in several herpesviruses genomes, viral encoded cyclins have been identified in several viral families including retroviruses. Some viral cyclins are able to induce hyperproliferation in infected hosts, which sometimes lead to malignancies. Many viral cyclins are homolog to cellular cyclin D, which regulates the G1 phase. The MHV-68 encoded cyclin is equally related to cyclin D, A and E. The functions attributed to viral cyclins correspond to cellular cyclins by inducing the G1/S phase transition, by hyperphosphorylating host RB or inducing host p27Kip1 degradation. Instead, the ODV-EC27 from baculovirus shares similarities with cyclin B, binds CDK1, thus prevents the binding of cyclin B to CDK1. In turn, the cell arrests in G2/M.