Decay of host mRNAs by virus

Viruses have evolved ways of degrading host mRNAs to favor their survival and maximize expression of their own mRNAs. Inducing cellular mRNAs degradation eventually leads to shutoff of host proteins expression and gives viruses transcripts a competitive edge for access to the cellular translation machinery and counteract the antiviral response.
Most viruses proceed by expressing an endonuclease that cleaves host mRNAs, which are in turn degraded by an host exonuclease, like Xrn1 in mammals 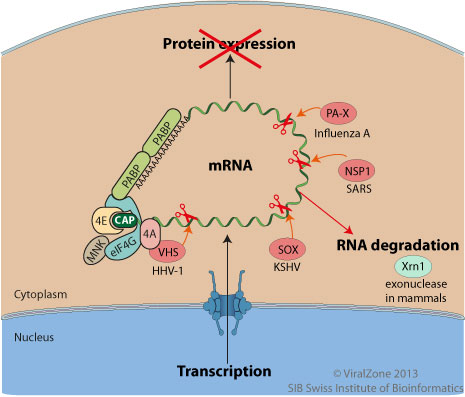 Influenza A virus PA-X protein encoded on segment 3 by ribosomal frameshifting may have a messenger RNA endonuclease activity and play a role in the observed reduced cellular protein synthesis.