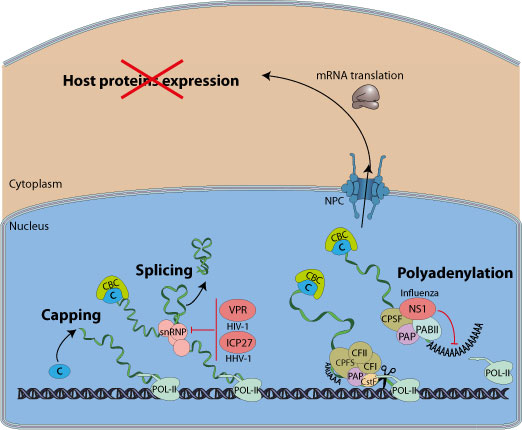 Some viruses interfere with host pre-mRNA processing function. Incompletely processed mRNA are non-functional leading to shutoff of host proteins expression. This gives viruses transcripts a competitive edge for access to the cellular translation machinery. Preventing the expression of host proteins is also a strategy to counteract the antiviral response. Some viruses have been shown to inhibit host pre-mRNA processing by blocking cellular splicing or polyadenylation.

Herpesvirus protein ICP27 mediates the inhibition of cellular splicing. Early in infection, ICP27 interacts with several splicing factors, including members of a family of essential splicing factors termed SR proteins, and affects their phosphorylation. This results in the blockage of the pre-spliceosome assembly, which in turn contributes to the shutoff of host protein synthesis because of incomplete cellular pre-mRNAs processing.

Influenza virus NS1 can bind to CPSF30 and PABII and thus inhibits host pre-mRNA processing.
NS1 of the 2009 Pandemic H1N1 has a truncated C-terminus and has apparently lost the ability to bind PABII