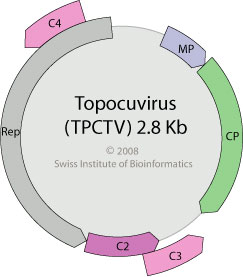 Monopartite, circular, ssDNA genome (+) genome of 2.86 kb. 3' terminus has no poly(A) tract. There are coding regions in both the virion (positive) and complementary (negative) sense strands.
The genome is replicated through double-stranded intermediates. The replication (Rep) protein initiates and terminates rolling circle replication, the host DNA polymerase being used for DNA replication itself. There is a potential stem-loop structure in the intergenic region that includes a conserved nonanucleotide sequence (TAATATTAC) where ssDNA synthesis is initiated.

Transcription is bidirectional from the common region (CR), which corresponds to the non-coding region common for topocu- and begomoviruses. 6 proteins are produced. In the V-sense: V2 and CP. In the C-sense: Rep, C2, C3 and C4.

Topocuvirus protein Rep is probably responsible for inhibiting host retinoblastoma protein and inducing transition from the G1 to S phase in preparation for virus replication since the virus targets differentiated non-dividing cells.