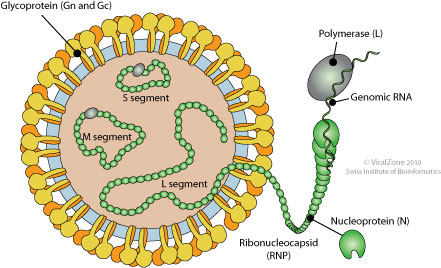 Segmented Negative-stranded RNA linear genome, L segment is between 6.8 and 12 kb, M segment between 3.2 and 4.9 kb and S segment between 1 and 3 kb.
Encodes for four to six proteins. Some hantaviruses also encode a NSs protein on their S segment.

The viral RNA dependent RNA polymerase (L) binds to a promoter on each encapsidated segment, and transcribes the mRNA. These are capped by L protein during synthesis using cap snatching . Transcription is terminated by a strong hairpin sequence at the end of each gene. mRNAs are capped by L protein during synthesis. Puumala virus expressed an additional NSs by leaky scanning in the NS gene.