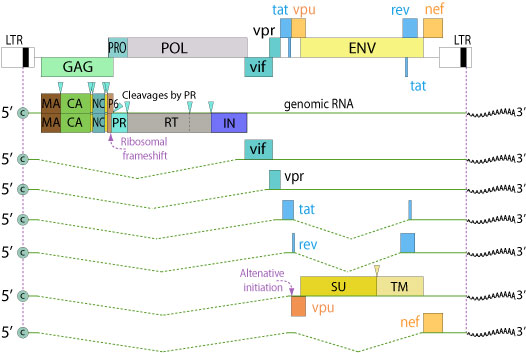 The integrated provirus utilizes the promotor elements in the 5'LTR to drive transcription. This gives rise to the unspliced full length mRNA that will serve as genomic RNA to be packaged into virions or used as a template for translation of gag and gag-(pro)pol (1 ribosomal frameshift) polyproteins. The uncompletely spliced mRNAs encode env that is cleaved into SU and TM envelope proteins, and the accessory proteins vif, vpu, and vpr. Completely spliced mRNAs encode Rev, Tat and Nef accessory proteins. Rev escorts unspliced and uncompletely spliced RNAs out of the nucleus of infected cells.

Three other HIV-1 proteins, Nef, Env and Vpu, contribute to downregulate CD4. Env forms a complex with CD4 in the endoplasmic reticulum, and retains the receptor in this compartment. Nef and Vpu target the receptor for degradation in the lysosome and the proteasome, respectively.

Vpr plays a role in the "induction of apoptosis" in HIV-1 infected cells via destabilization of the mitochondrial membrane leading to cytochrome C release and activation of the host caspase 9/3 pathway.