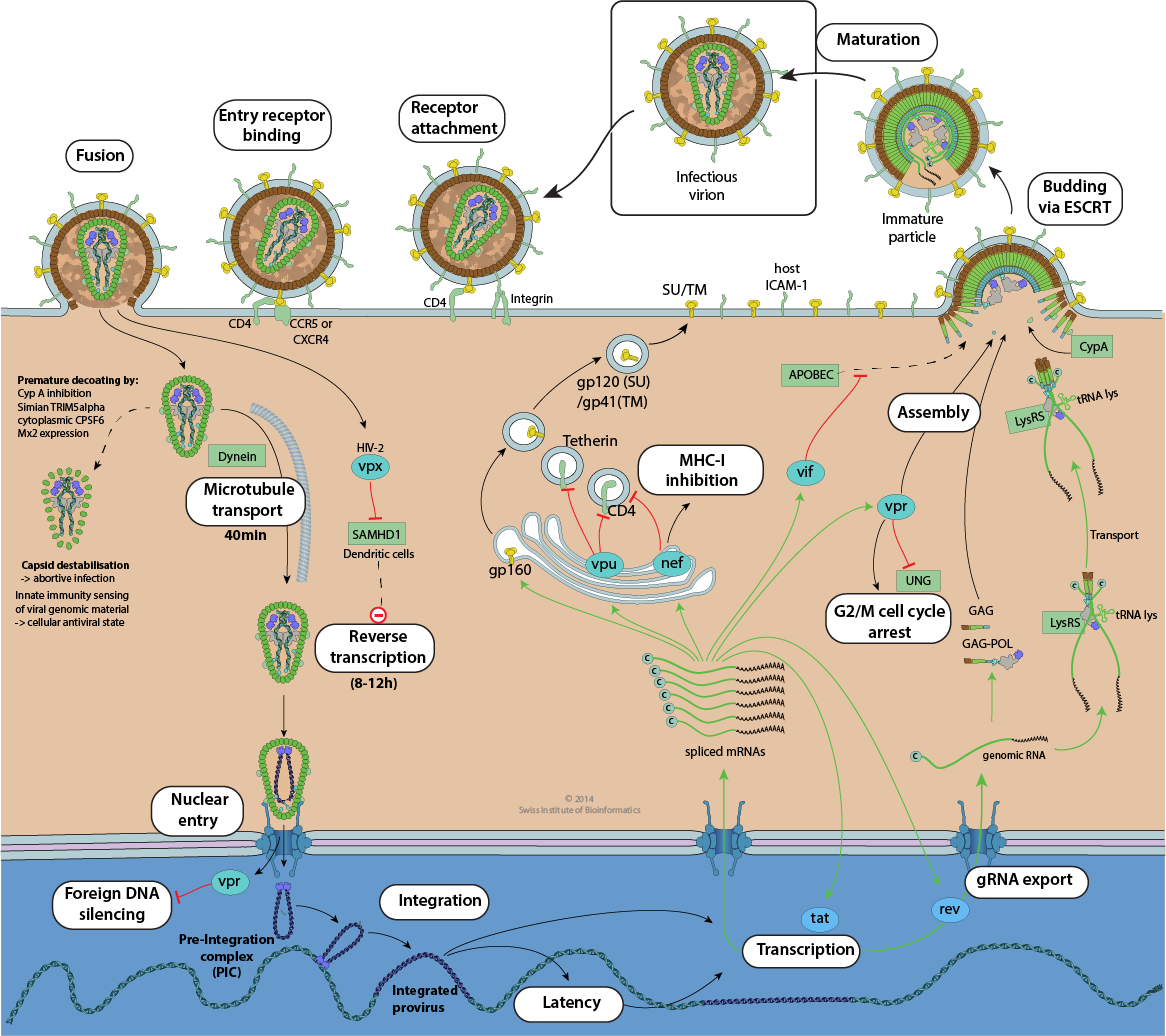 The average lifespan of virus-producing cells is short ~2 days.

- DNA starts to be detectable in the nucleus 4h after infection.

- Later, the assembly of the gag-shell takes about 10 min

The gp120 binds to the attachment receptor CD4. This binding is reversible and important for HIV entry, although not mandatory. Gp120 then binds to the entry receptor CCR5, which is a signaling receptor. It is unclear whether the virus fuses at the cell surface or is endocytosed by clathrin mecanism

Release of viral components into the cell cytoplasm.

After virus-host membrane fusion, the viral capsid is released into the cytoplasm. In certain cells, such as dendritic cells, Vpx (HIV-2 only) is thought to be transported into the nucleus, where it facilitates reverse transcription/ PIC entry by counteracting the specific host defense mechanisms of these cells.

Linear reverse transcription is initiated in the mature virion, but usually occurs after the capsid is released into the cytoplasm. All HIV capsids are diploid, and comprise two copies of genomic RNA. Does diploidy play a role in reverse transcription? Several studies have addressed this question: First strand transfer could occur intermolecularly

, but it could also occur with a single molecule of genomic RNA

. In other words, the mechanism of reverse transcription does not explain the observed diploidy of the capsid.

The viral capsid interacts with microtubules and is actively transported near the nucleus. This would occur simultaneously with reverse transcription. This transport takes 40 min ex vivo

Uncoating is the process by which the viral cDNA genome is released from the capsid. It is a multistep process closely associated with reverse transcription

. Early uncoating may induce an antiviral response of the cytoplasmic dsDNA sensor.
Entry of the pre-integration complex (cDNA, integrase) into the nucleus occurs through various bindings to the nuclear pore and is dependent on the presence of vpr. Viral penetration into host nucleus

The viral cDNA is covalently integrated into the host genome by integrase, preferentially at transcriptionally active sites. The integrated viral genome is referred to as a provirus. Viral genome integration

The provirus can be transcribed to the point where it reaches tat expression and can enter the replicative phase. Alternatively, it can be methylated by host factors, and this transcriptional silencing induces viral latency

Cellular stress or activation can lead to nuclear signals that abrogate transcriptional silencing of the provirus, initiating the viral replication cycle

Provirus transcription is under the control of tat and many host transcription factors that interact with the U3 promoter. mRNA transcripts can be alternatively spliced into six mRNAs. dsDNA templated transcription

Genomic RNA exit from the nucleus

Unspliced genomic RNA (gRNA) cannot be exported to the cytoplasm under normal circumstances, because unspliced RNA is prevented from doing so in eukaryotes. The viral protein rev specifically unlocks gRNA export to the cytoplasm. The gRNA serves both as a template for GAG and POL translation and as genomic material for budding into new virions. Genome export through nuclear pore

The genomic packaging signal (Psi) is only encoded in genomic RNA (Psi on wikipedia). In monomeric gRNA, the Psi element is inactive because it is sequestered by intramolecular base pairing. After gRNA dimerization, cross-hybridization of the RNA exposes the Psi element, which allows specific binding of the gRNA dimer to the nucleoprotein (NC) domain, and initiates assembly

. Subsequently, several GAG proteins interact with a gRNA-NC complex. The latter is transported by actin or microtubules to the plasma membrane, where final virion assembly and budding occurs.

Maturation of the virion

Upon release of the viral particle, the protease is activated and cleaves the polyproteins GAG and GAG - POL into individual chains that self-assemble in the virion to form a conical capsid. In some virions the capsid may self-assemble into a cylinder, in these the viral genome appears to be from the formation of the capsid

The HIV resource is supported by the Swiss South Africa Joint Research Programme.