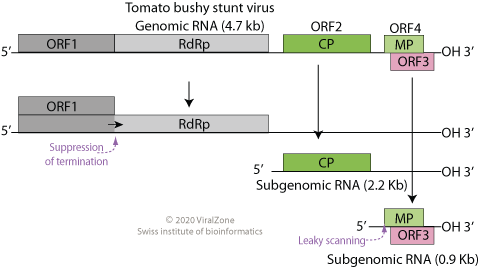 Monopartite (except Dianthovirus which is bipartite), linear, ssRNA(+) genome of 4-5.4 kb, which lacks a cap structure and a poly(A)tail.

The virion RNA is infectious and serves as both the genome and viral messenger RNA. Two 5'-proximal ORFs are directly translated to produce the viral constituents of the replicase complex. RdRp is translated through suppression of termination at the end of ORF1 (tombusvirus-like and carmovirus-like), or ribosomal frameshifting (Dianthovirus and umbravirus). The downstream genes encoding the movement protein, and capsid proteins are translated from subgenomic RNAs. viral suppressor of RNA silencing (VSRs) is expressed by leaky scanning of the MVP subgenomic mRNA.
Cap-independent translation is mediated possibly through the interaction between a 3'-cap-independent translation element and a 5'UTR stem-loop.