For most phages, active and timed lysis involves three steps corresponding to disruption of each of the three layers of the cell envelope: inner membrane, peptidoglycan and outer membrane

Two proteins, an endolysin and a holin are usually required for programmed host cell lysis by dsDNA prokaryotic viruses

. Additional proteins called spanins are involved in the lysis process in Gram-negative hosts. A multistep process allows a better control of lysis timing 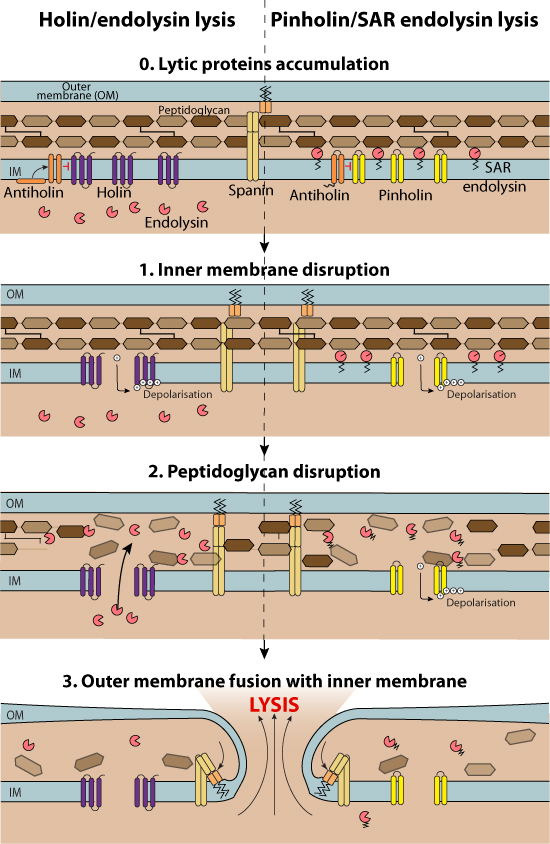 Holins (from making “holes”) are small membrane proteins that control the lysis timing. They accumulate in the host cell membrane until, at a programmed time (probably when reaching a critical concentration), they aggregate into oligomers and permeabilize the host cytoplasmic membrane inducing loss of polarization.

Canonical holins form large pores at one side of the bacteria, exposing locally the peptidoglycans to cytoplasmic canonical endolysin molecules

ssDNA and ssRNA prokaryotic viruses usually have a “single gene lysis” which is thought to inhibit the peptidoglycan layer polymerization.
The advantage of the two-component system is that holins allow a abrupt and time-determined lysis thus preventing slow host cell deterioration.

Spanins are essential for the lysis of bacteria with both internal (IM) and outer (OM) membranes (mostly Gram-negative). Lysis of these host bacteria additionally requires the disruption of the outer membrane. Spanins span the inner and outer membrane either as a unimolecular (u-spanin) or as a heterodimer molecule (IM-spanin or i-spanin + OM-spanin or o-spanin)

.
After cell wall degradation by the endolysin, the spanin complexes are free to diffuse and aggregate. the lytic blowout occurs when sufficient spanin complexes are liberated within the degraded area of the PG. They mediate the fusion of the IM and OM, thereby disrupting the cell membranes